The strange, fantastic characters by Paloma Varga Weisz (*1966, living in Dusseldorf) reveal themselves to and escape the eye of the viewer at the same time. They suggest narratives but never formulate them and remain in exactly that state of suspension, which is devoid of the presentation of specific persons in favour of general, human figures. Their symbolically significant charge unfolds its tension from the specific and the general, coming to the fore in surreal snapshots. The magical and dreamlike, melancholy, tragic and repressed calmly come together in Varga Weisz’ works, but are all the more moving for this.
Since the 1990s, the artist has been producing sculptures made of wood and ceramic, as well as installations, watercolours and drawings in which she assumes and transforms iconographic traditions and forms of representation. The bust titled “Lady of Naumburg” (2016) of prepared limewood, for example, referring to the sculpture of Uta of Naumburg at Naumburg Cathedral, is shown without jewellery or crown; the head section is painted plain white, while the base of the gown is stained with dripping colour.
Varga Weisz’ figures and her materials are permeable, allowing the latently invisible to come to light: Masquerades, metamorphoses and stigmata grow out of them and psychologise the motif. The underlying stories are derived from the human body, dreams and memory and often reveal semantic sexualisations, which critically reactivate the idealised representational traditions.
Works from the series titled “Bois Dormant” (2015) form the core of the exhibition at Fürstenberg Contemporary. In the galleries, Varga Weisz has arranged objects such as hats and horsetails together with small format sculptures representing extremities – including female busts or male heads. The cabinet as a personal means of imposing domestic order, as a spatially enclosing element, is also seen as a symbol of the female body in the interpretation of dreams. In “Cabinet 4”, there is a male carved figure with hat and breeches, with his hands in his trouser pockets, looking at the back panel of the cabinet. In this compartment, the grain of the wood cannot be seen, but rather a tightly arranged multitude of vulva. In a similarly demonstrative manner, a male sexual feature grows from the mountain climbed by the “Mountaineer” (2015). In such simple yet deeply rooted confrontations, the artist lays open unspoken subtexts.
“Bois Dormant” is shown by Varga Weisz in “Cabinet Piece” together with watercolours and other solitary sculptures, in which subjects such as hats, double heads, figures of hikers and deformations are repeated. Headgear that has for centuries served as an expression of status and freedom appears as phallic stacks of hats or on the heads of the sculptures, as an accumulation of straw hats, as veils made of hair wrapped around the head, as a pumpkin, a Ginkgo leaf or a dog’s head. The latter can be found in the watercolour “Portrait of a Dog” (2007), in which the human and animal are inexorably combined. The sheet shows a mouth, nose, three pairs of eyes, a pair of human ears and a pair of dog ears in a surreal overall portrait that condensed exactly the movement inherent to the work of the artist. In interplay between material and theory, they merge supposedly foreign elements into a coherent form, in which two perspective forms can no longer be distinguished from each other, like a picture puzzle; one is always already contained in the other. Thus, Paloma Varga Weisz calmly lends expression to subcutaneous wishes, obligations and identities in her beautiful yet disturbing figures. 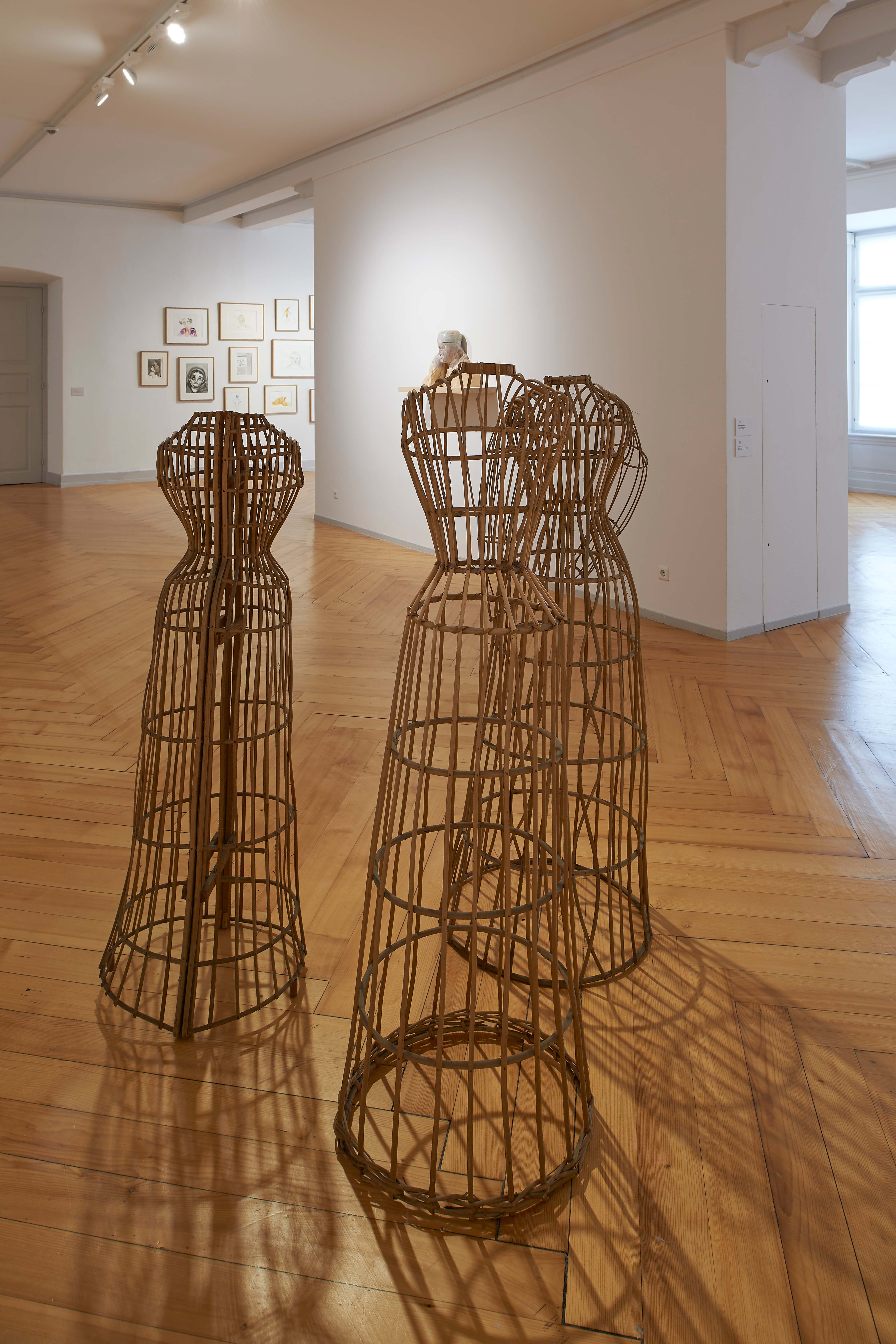 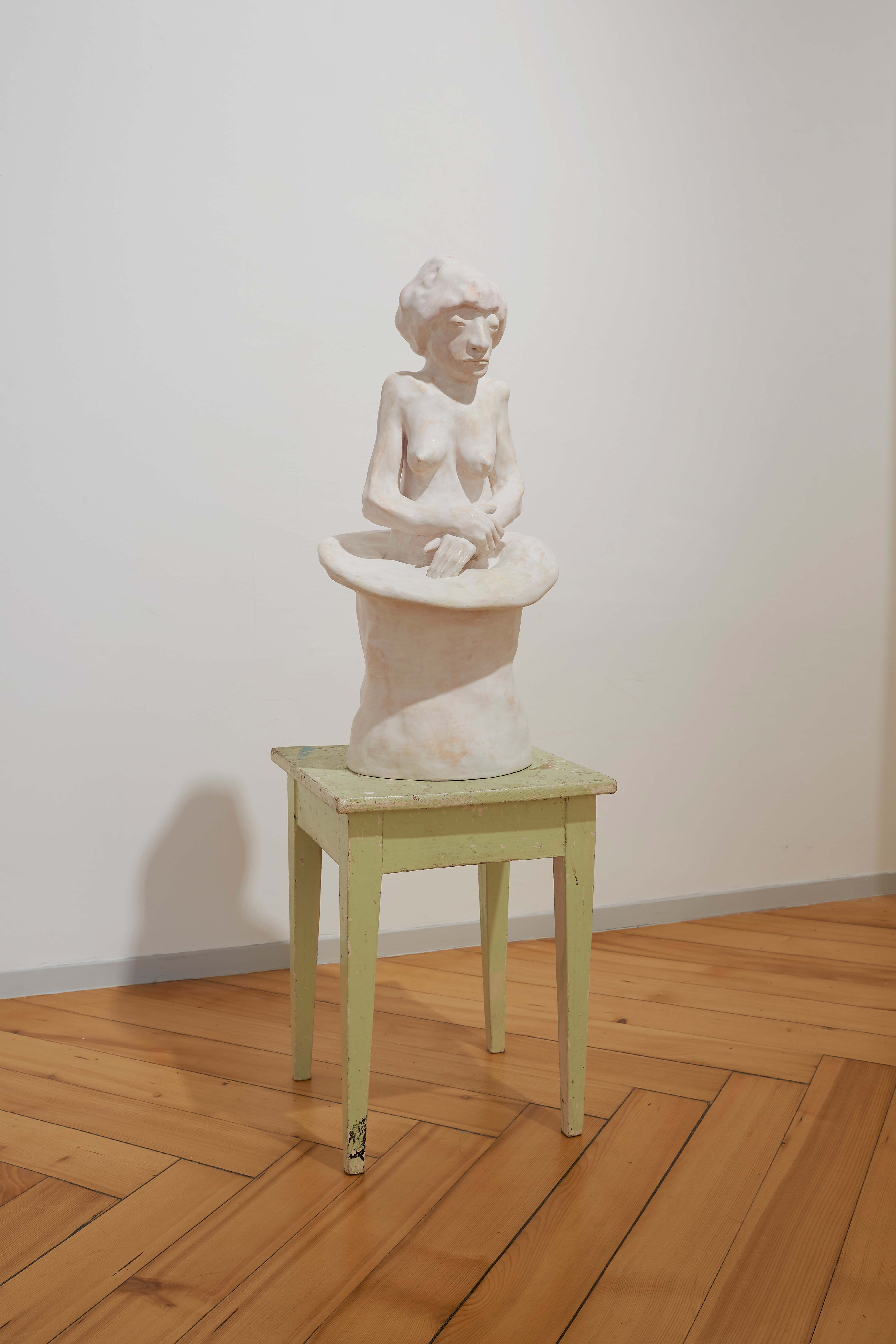 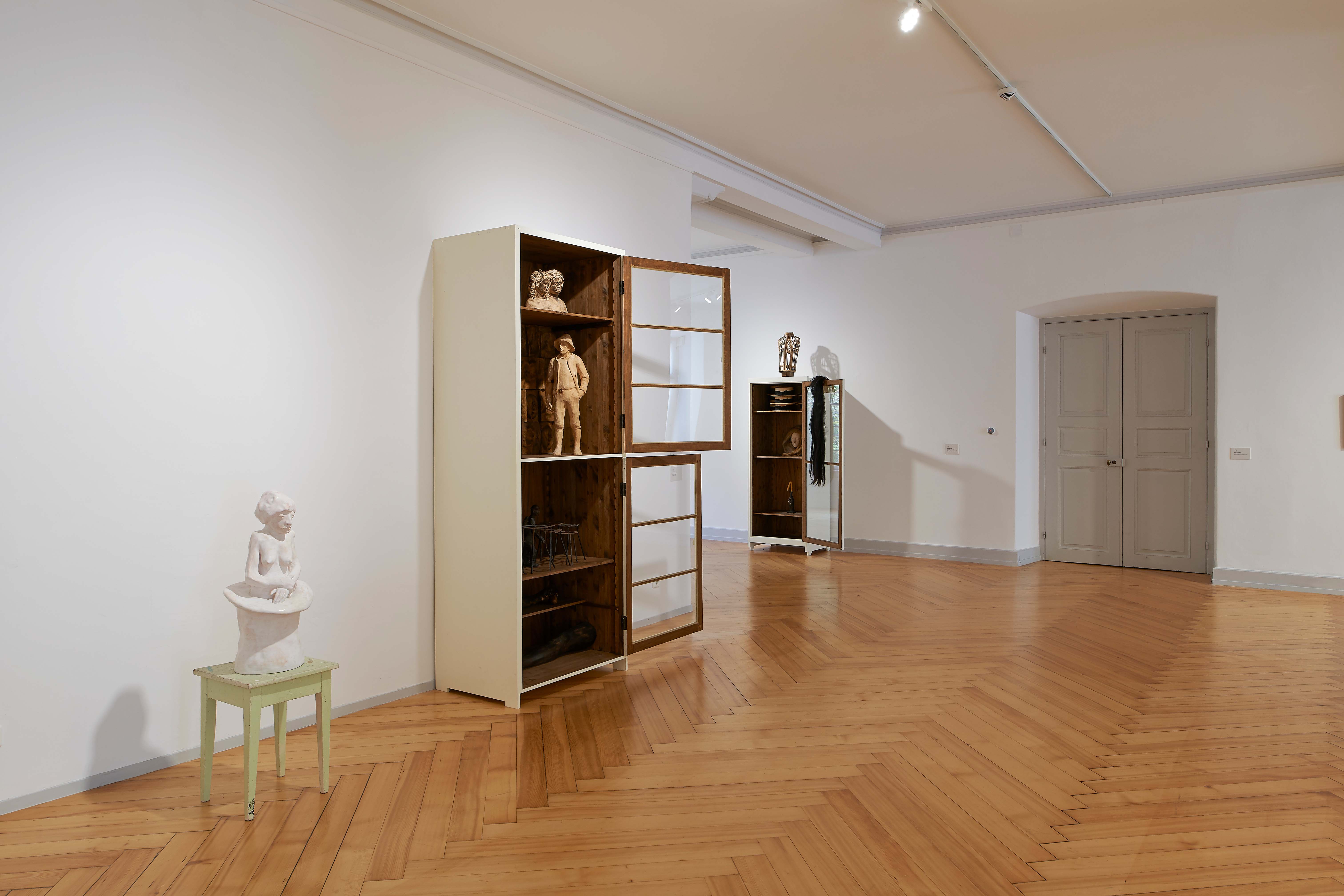 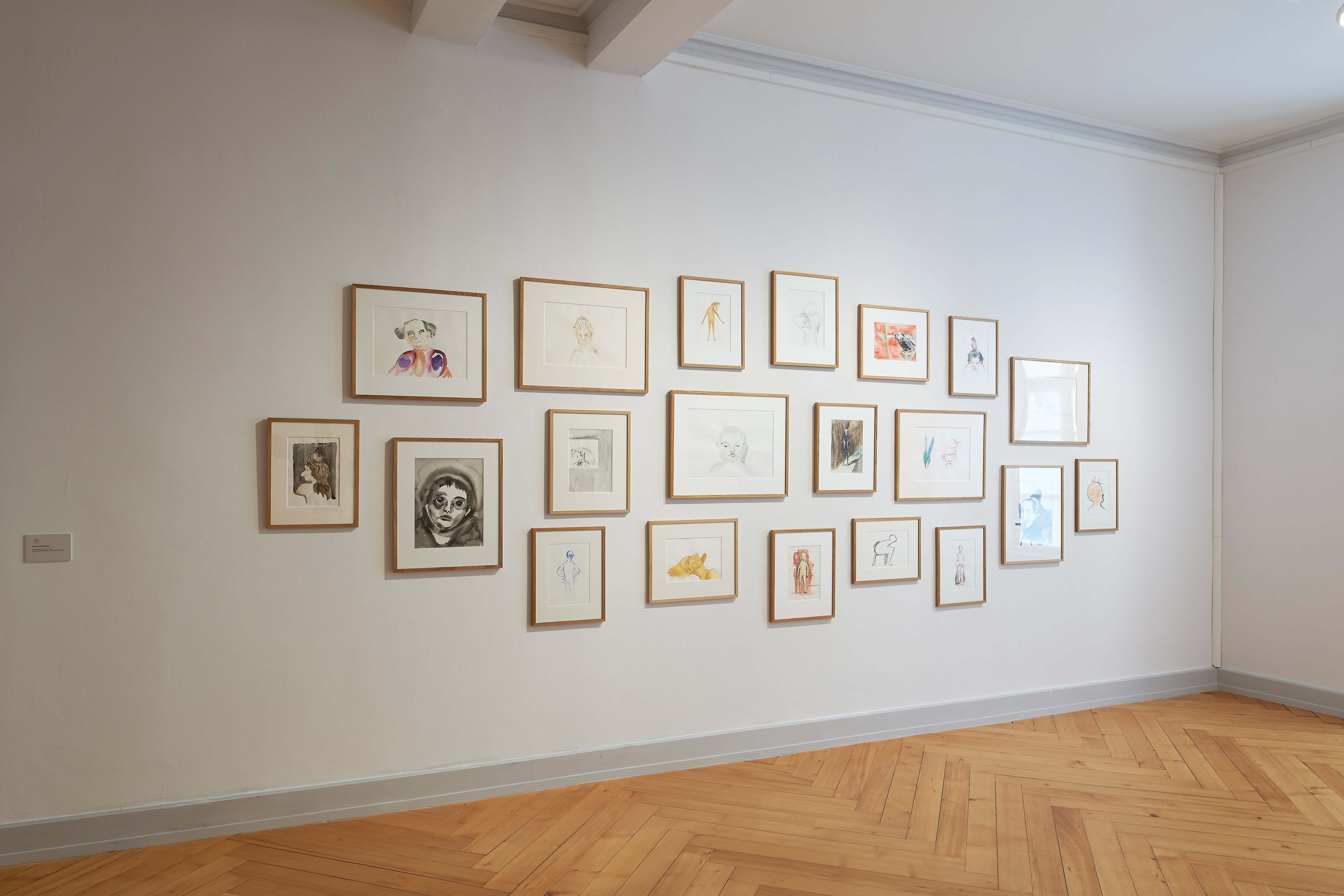 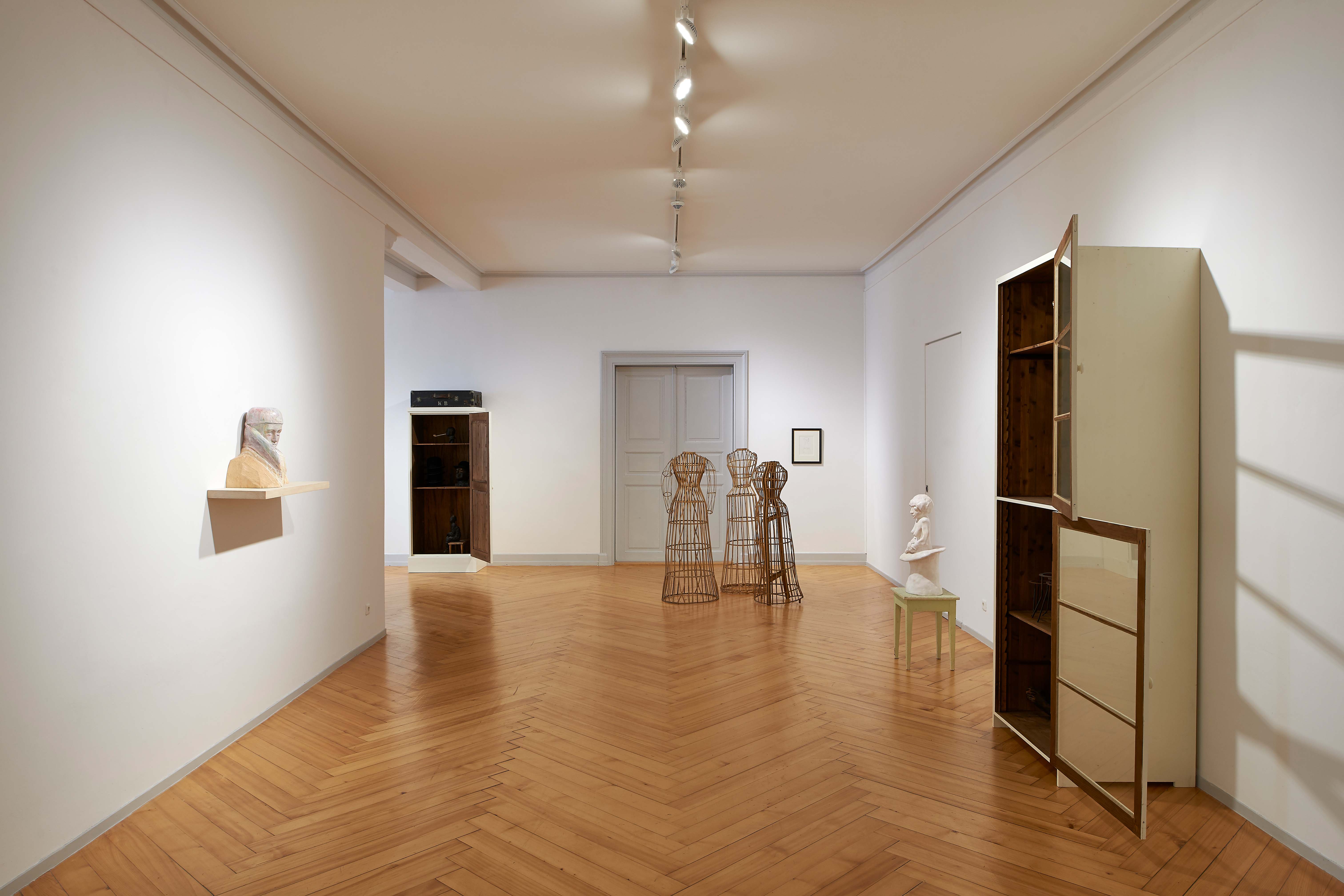