Like a tailor-made robe, Julian Göthe’s installation “interspace (the things that concern you)” clings to the walls of the “Fürstlich Fürstenbergische Collections” and connects the individual floors of the building as well as the different collection areas to each other in a most impressive way.
The work by Göthe, developed during the course of a stay in Donaueschingen for the staircases of the building, consists of black ropes that are linked to a wide range of forms and, among other spaces, suggest architectural design elements and ornamental patterns in various manifestations. Straight lines and stringency meet sweeping curves and abstractly suggestive lines and contours meet clearly readable, somewhat figurative forms. Thus, the crooked flights of stairs characterise the meeting of faceted and crystalline forms, while the lines in the horizontal passages of the landings merge with opening curtains or pylon-like figures.
Regardless of their respective appearances, Göthe’s wall installation demonstrates a strong graphic effect, which upon closer inspection combines to take on the appearance of reliefs or an organic structure. Through the playful passages, the suggestion of Art Deco or Italian Art Nouveau may just as well come to mind as influences from the hard, clear forms of American Minimal Art.
References to the Mannerism of the 16th Century are also visible in the work and can, to this extent, also be seen as important sources of inspiration for the artist’s work, alongside those already mentioned. The differences between that actually exist between these clearly distinguishable directions prevail, and are gallantly overcome, combining to form a completely new structure.
Within the spatial arrangement of the “Fürstlich Fürstenbergische Collections”, Göthe’s artistic intervention transforms the “interspace”, the space between the individual exhibition areas into a stand-alone work, so that this space is relieved of its pure intermediary function. The staircase becomes an imaginary stage on which the visitor assume the role of actor and enters into a relationship with the work. Göthe creates a new sense of space and thus heightens one’s sensitivity to the historical architecture of the building, which is both accentuated and contradicted in various ways. Without allowing the structure of the building to fade into the background, Göthe’s work displays a unique and reverberant presence, which not only adds to the identity of the place but also anchors it more clearly in our consciousness.
The wall art is complemented by the sculptural work “This Room is my Castle of Quiet” from 2004, which was deliberately placed in the Oberlichtsaal (Skylight Hall) of the Greek and Roman tableau of the “Fürstlich Fürstenbergische Collections”. The work is formed from white, filigree steel rods over three pointed converging feet that taper to a narrow body, crowned by seemingly very soft feathers. A thin, elegant, falling and almost transparent fabric wraps around the centre of the sculpture and adds to its already very graceful appearance. This causes it to appear extremely versatile and rich, so that one could describe it as a glamourous, diva-like form.
The work is presented within the hall on a specially-made base, which refers in its proportions to the pedestals of the ancient tableau and in this way connects it to the permanent collection of plaster casts in the “Fürstlich Fürstenbergische Collections”. The work is, to the same extent, in a harmonious and disharmonious relationship with the casts, without resolving this contradiction. And so, Göthe’s sculpture appears to be as misplaced as it does to fit in to the hall, thus creating a mysterious tension.
Regardless of this paradoxical relationship, Göthe’s work, through its brilliant appearance, adds an elegance and splendour to the sculpture hall, where it seems no less timeless than its ancient counterparts. In very much the same way as the wall installation, Göthe’s sculpture also creates a bridge between old and new and thus transforms the Oberlichtsaal of the “Fürstlich Fürstenbergische Collections” into an installation arrangement. 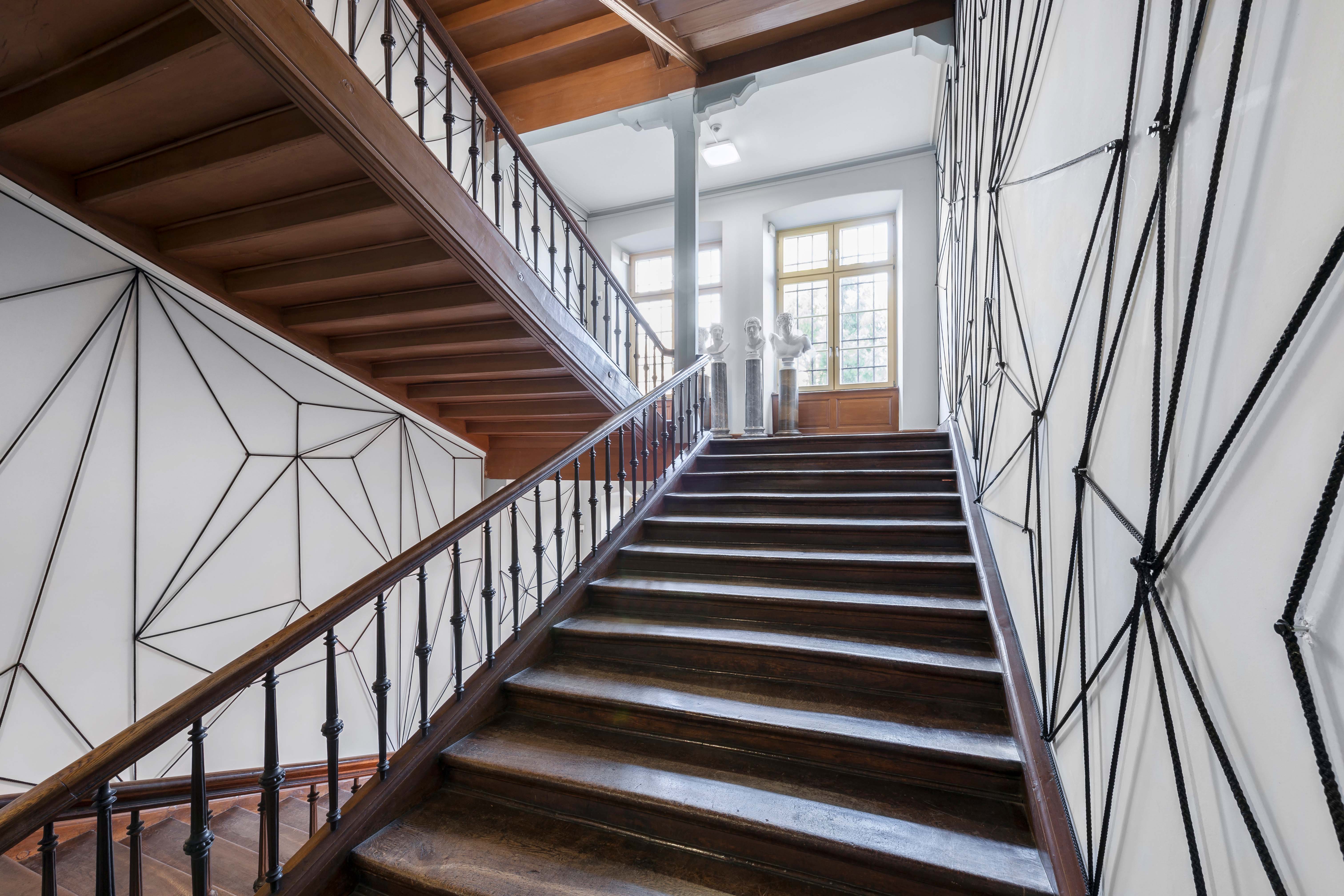 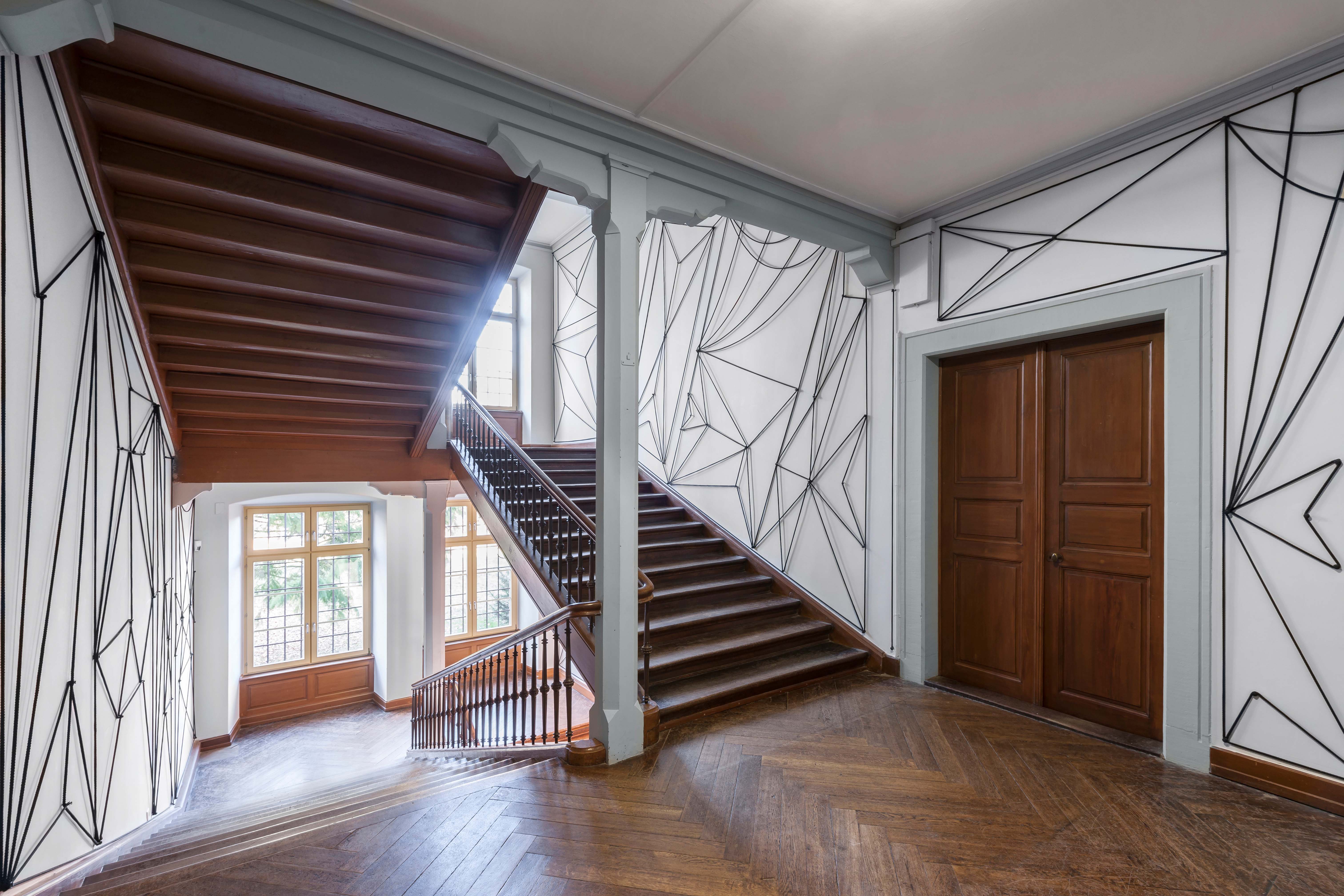