Like the “Zweite Streich” (second strike) by Wilhelm Busch, which centres around four well-fed chickens, who are fished out of the Widow Bolte’s kitchen by the two rascals, Max and Moritz, the exhibition in the “Fürstlich Fürstenbergische Collections” is also a quartet of objects of desire. In contrast to Busch’s story, however, it is not examples of this common species of bird but rather four artists of different origins, who are the focus of attention in the context of the exhibition.
The number is to be stressed, as each year only three artists are usually awarded the Fürstenberg fellowship at Heiligenberg Castle. Last summer, however, the number increased by way of exception from three to four, and Petrit Halilal from Kosovo and Dorota Jurczak from Poland were joined by the Portuguese artist duo João Maria Gusmão & Pedro Paiva. The creativity was not detracted from by this change in the framework conditions; on the contrary: Over the summer months a whole range of ideas were hashed out, incubated and laboured over at Heiligenberg Castle, so the second fellows’ show in Donaueschingen could be assembled from a comprehensive selection of works.
As in the case of the “Absolute Beginner” exhibition, essentially the “first strike” by the Fürstenberg fellows in Donaueschingen, the stay at Heiligenberg Castle was again reflected in the artistic productions during the second year of the programme. This was particularly evident with João Maria Gusmão & Pedro Paiva, who during their stay completed various films and photographic works that relate directly to the Black Forest and Lake Constance region by examining typical local products, such as a cuckoo clock, or referencing topographic features, such as the nearby Rhine Falls at Schaffhausen. In doing so, Gusmão & Paiva used these objects and places as starting points for their thoughts and observations, thus allowing for a new appreciation of familiar sights by shifting the angle of perspective, decelerating the normal rhythms and focussing in a targeted manner on or fading out certain details.
Thus, in the filmic work “Cuckoo Clock” for example, the inner life of a constantly moving cuckoo clock becomes an hypnotic spectacle, which ends with the slowed down greeting of the miniature bird through the small hatch in the wooden clock, or appears, like a shimmering fata morgana, in the form of a handmade rainbow over the rushing waters of the Rhine Falls. The work by the two Portuguese artists clearly strikes at our perception and our habits and mixes the supernatural with the world of science and with myths and legends.
Chickens, like those stolen from the Widow Bolte in Wilhelm Busch’s story, are also one of the great passions of Petrit Halilaj, who was also a fellow at Heiligenberg Castle with João Maria Gusmão & Pedro Paiva. The artist who was born in 1986 in Pristina has been fascinated since his youth with these birds from the “pheasant-like” family. Halilaj’s drawings, however, are not just mere reproductions, like these common poultry. He presents the chickens as puffed up, extroverted, strutting creatures that demonstrate their own, clearly distinct personalities and can be categorised as “bourgeois hens”, a sociological group. Social conditions, classifications, norms and values, as well as memories of his childhood and youth represent the main areas around which Halilaj’s work revolves. This can also be clearly seen in the engaging video work “Who does the earth belong to while painting the wind?!”, in which Halilaj and his camera roam through the terrain where his family home one stood and was destroyed during the Kosovo war 1998/99, where nature now breeds new life and hope. Halilaj is a poetic storyteller, who processes his own, young biography in his works and, based on such universal issues as homeland, identity, history or memory, comes into focus.
Narrations in various manifestations also play a central role in Dorota Jurczak’s work, the fourth Fürstenberg fellow, even if these are less developed by the native of Poland through intimations and symbols than they are by Halilaj. The masterfully crafted paintings, drawings, graphics and objects by the artist born in Warsaw in 1978 tell of human and animal creatures that could have escaped from the world of children’s books and thus initially appear to be very tranquil. However, on closer examination it becomes clear that Jurczak’s creatures are anything but cute or child-friendly. The figures the young Polish woman brings into our field of vision with precisely set lines combine with a cryptic, sometimes horrible moment that is vaguely reminiscent of the moods of surrealism or grotesque art. Here, animals have both human traits and limbs, filigree beings emerge from pipe smoke or birds are eaten alive by humans. References to the psychoanalysis of Sigmund Freud can be inferred from Jurczak’s works, as well as allusions to art-historical precursor such as Hieronymus Bosch. References to the eponymous Wilhelm Busch are also suspected at this point, so that it does not come as a surprise that it must Jurczak was convinces to design the invitation card for the “Second Strike” exhibition.
But why these numerous references and allusions to Wilhelm Busch and his famous creations? The reasons for this are obvious: There are clear parallels between “Max and Moritz”, the memorable illustrated stories by Busch, and the second presentation of the Fürstenberg fellows in Donaueschingen. The following applies to the annually recurring exhibitions of fellowship programme in the “Fürstlich Fürstenbergische Collections” as it does to Wilhelm Busch: “This was the second strike, but the third followed immediately.” 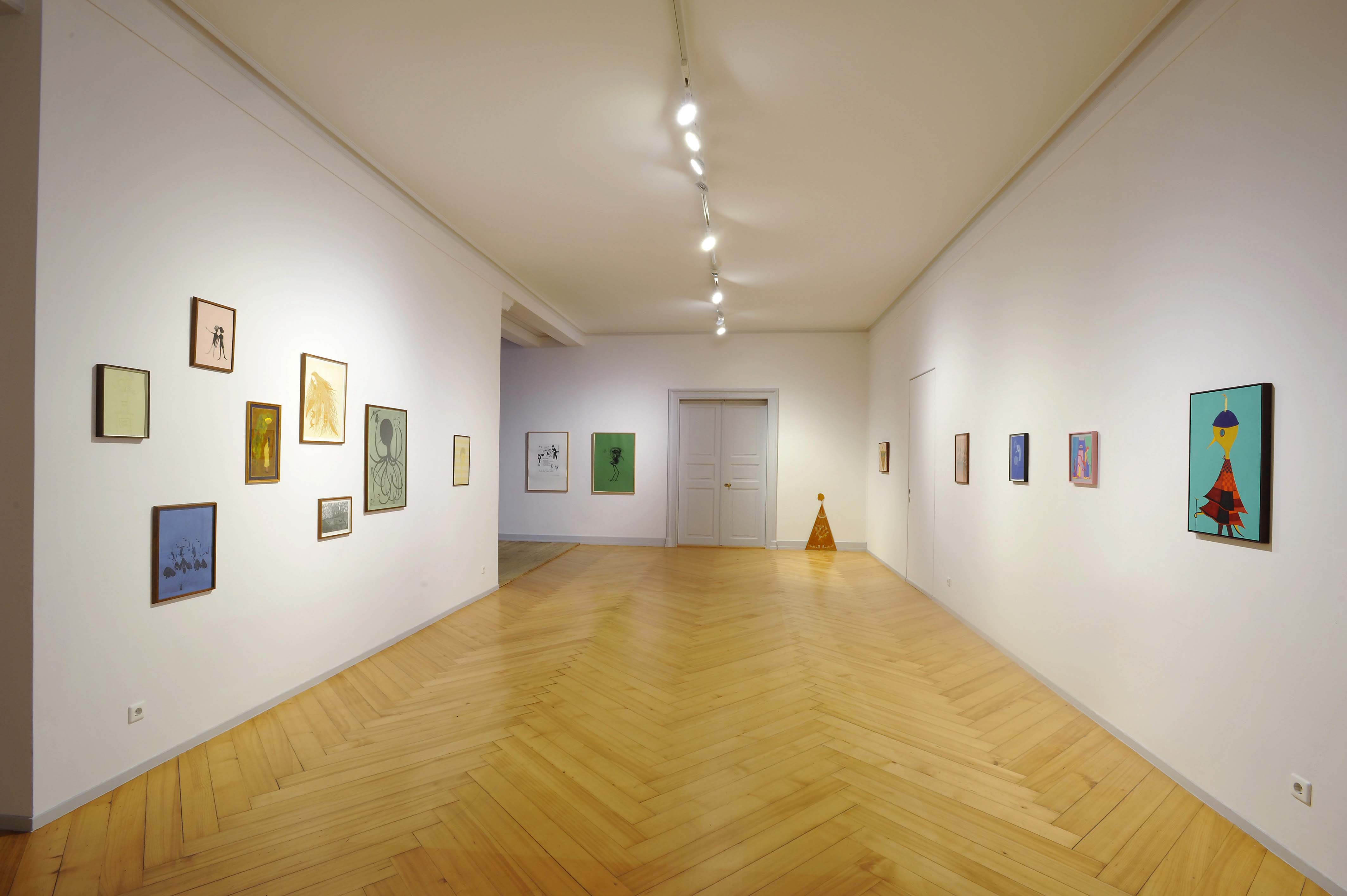 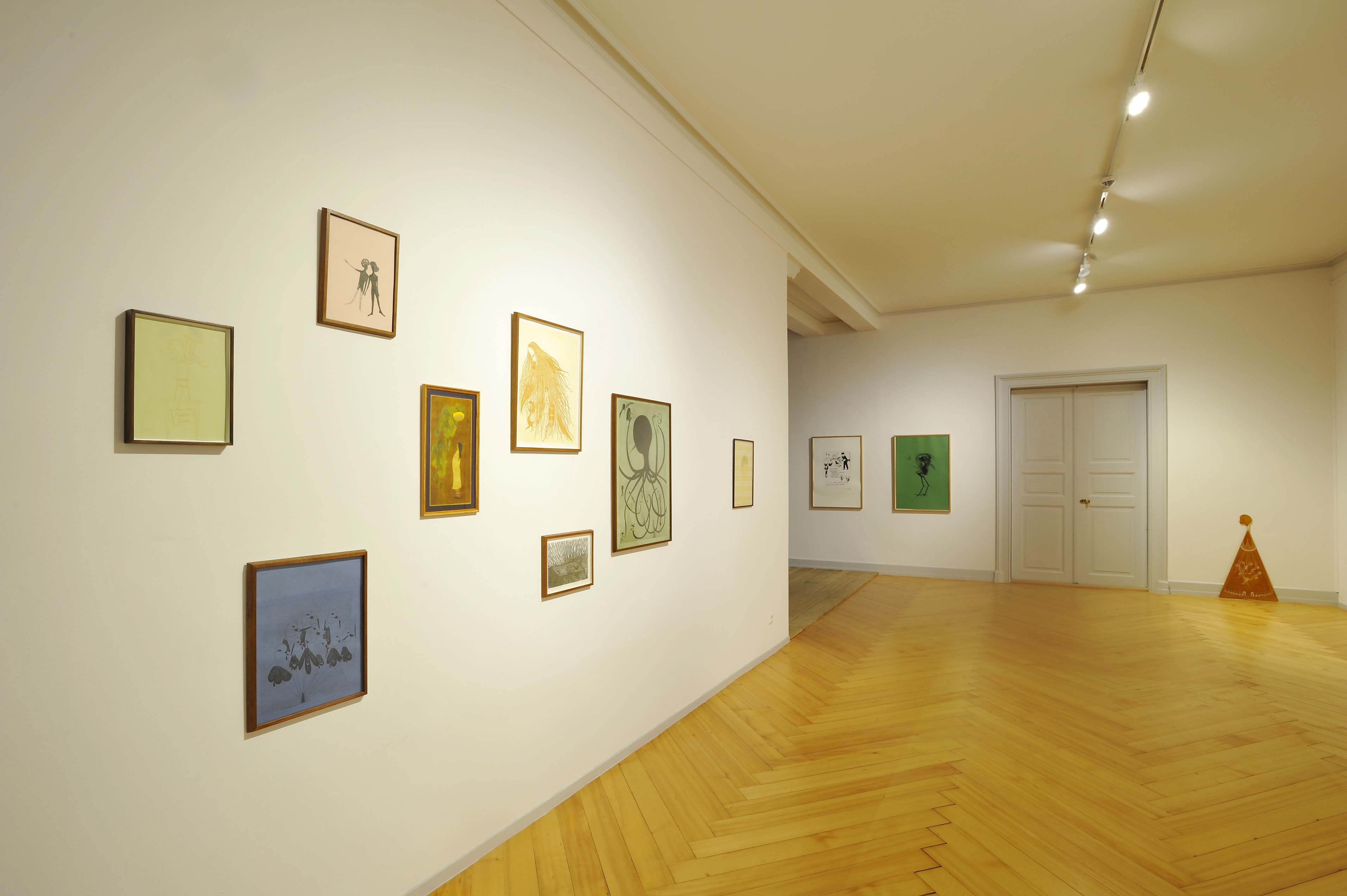 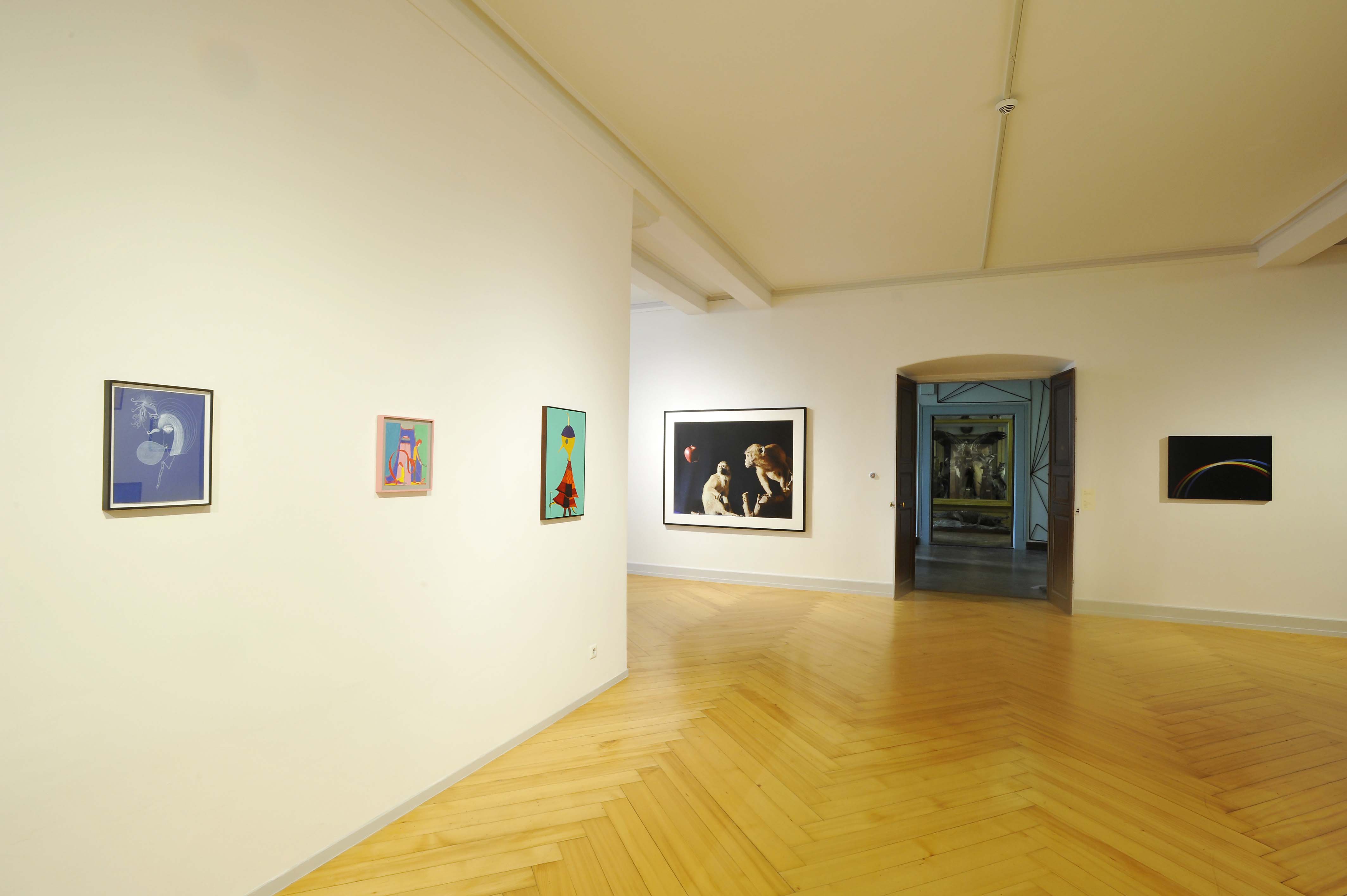 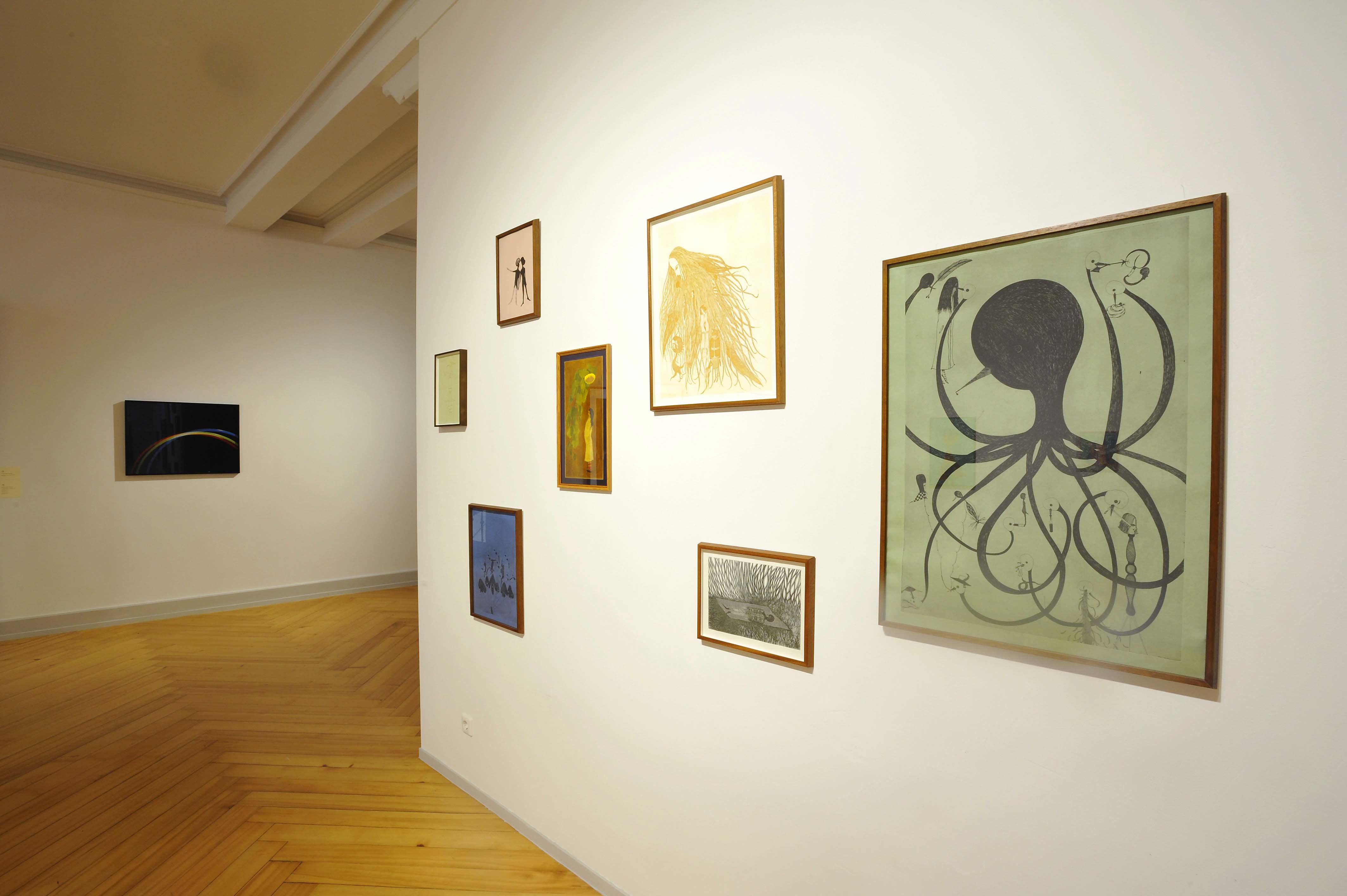 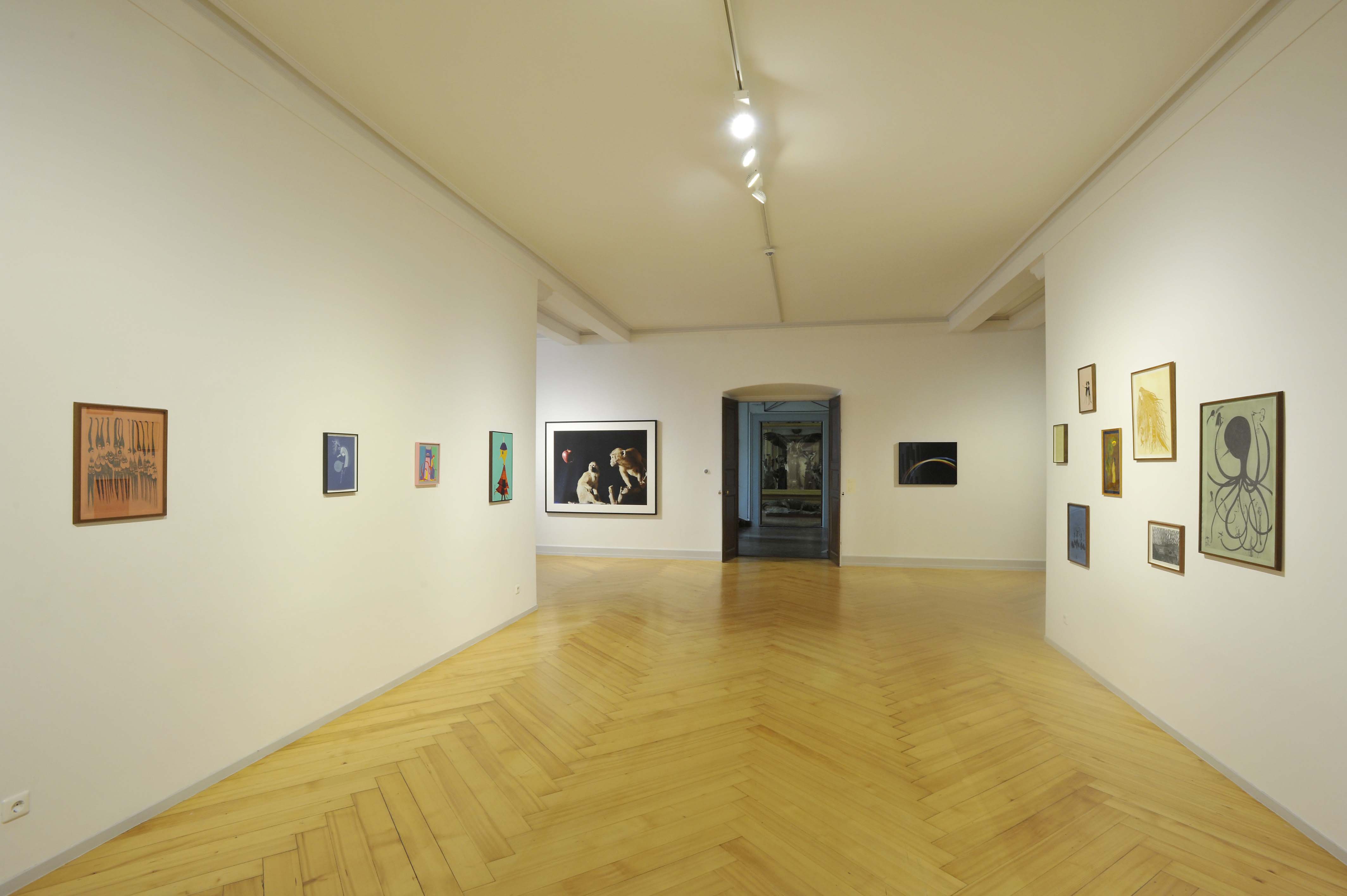